For the AVS the year 2005 was a year of celebrations: the AVS celebrated its 25 anniversary and it was also 70 years ago that an Arabian Horse Registration Office was founded in the Netherlands. On these occasions, it was even more special that WAHO gave us the possibility to adjudge this prestigious award in our celebration year. We asked our members to nominate horses for this special award, and we received many suggestions.

A committee of 3 persons finally decided which horse should be the first WAHO Trophy winner of the Netherlands. It was the famous chestnut stallion Amal, born 25 years ago in the stables of Mrs. H. De Ruiter-van Eyndthoven. He is by World Champion stallion Abdullah [Patron / Psikhea]. Both sire and dam were born in the Netherlands, although his dam Naomi [Darjeel / Zelda] was imported in utero from Britain and the sire and dam of Abdullah were from Russia. Just four years later, Amal was to follow in the hoof prints of his father: he became World Champion Stallion in 1984! As a breeding stallion, he was also in demand, being leased to the United States in the mid 1980s, and later to Great Britain. In Springfield USA he became Reserve Champion in 1987, in 1994 he was National Champion in GB and in 1995 the International Champion of Towerlands. His quality is clear, he really was an ambassador for the Dutch Arabian Horse breeding!

Then his offspring went on with this success formula: he is the sire of many good broodmares, who also became champions on the national level: Lestokada (x Lekbira ), Langani (x Lekbira); Lady Amal (x Lekowitsca ) and on an international level: Vicuna (x Safiry), and Elounda (x Chadiga) National Champion in GB in 1989. His son Rabhar became Reserve Champion at the World Championships in 1987 and another son, Armani became National Champion. In sports we can mention his offspring: Amach (x Emucha) on the racetrack in GB, and the very talented western and dressage horses: Karami (x Romea van Dennenoord) and Makkeda (x Marosha) who both nearly reached Prix St. George Level. Amal’s grandson Ibn Armani achieved the distinction of European Champion in Western Riding. Because of the quality and important place of Amal and his offspring in the Arabian horse history of the Netherlands, the commission decided to present the WAHO Trophy to this exceptional stallion’s proud and happy owner, Mr. Mokveld. We honoured them at our special celebration on the occasion of the Jubilee of the AVS, so it was a very festive evening! Amal was presented by his trainer, Mr. Chris van Schalkwijk and the WAHO Trophy was handed over by Mrs. Hannie Wehkamp, President of the AVS. 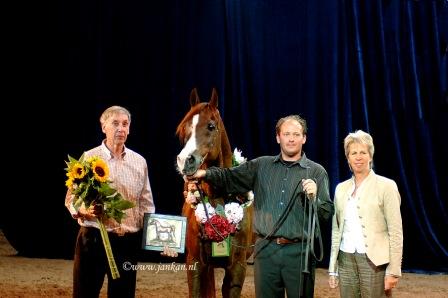