The Arabian Horse Society of Australia is pleased to announce their 2021 WAHO Trophy has been awarded to the broodmare, Bremervale Charmed, who is herself the dam of two previous WAHO Trophy winners. 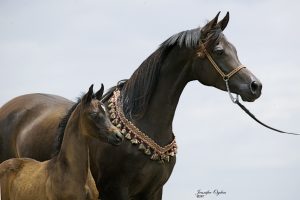 Citation from her owners:

Bremervale Charmed has been an incredible mare for us here at Future Farms. We purchased her as an 8 month old foal from Bremervale Stud 19 years ago and what she has created for us is incredible.

Although we have always joked she is the Princess forever on the farm, as she has never produced a filly, her 7 male progeny include:

Charmed now has over 200 grandchildren in Australia alone, and her legacy shines through in most of our FF horses, both purebred and derivative. Her ability to produce incredible type on all her progeny, with correct structure, good heart rates and superb minds has created a super successful family of horses spanning the world in so many disciplines.