Citation written by his owners, Kate and Doyle Dertell: The story of Crave FF begins long before he was even born. In 2001 we made the decision to begin breeding purebred Arabian horses. We knew we needed a superstar matriarch mare to start with and our search began. After several months of searching we found a stunning weanling filly that ticked all the boxes. That filly was Bremervale Charmed. We purchased Charmed that weekend and brought her home. Charmed was a super show horse in her time, gaining multi Australian Championship titles, however her main duty for us was to prove herself as a broodmare. This she proved after being bred to Mash for her first foal, being Crave FF. 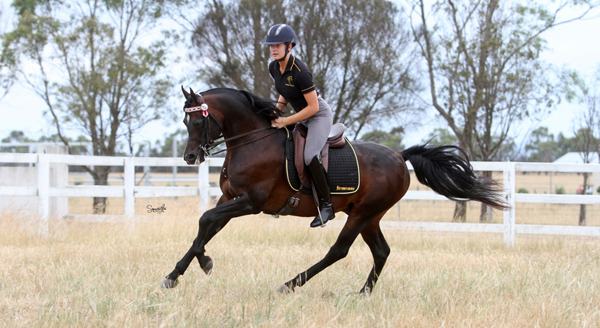 He was an exquisite foal right from the start, always having something special about him which stayed with him as a future show horse. Crave FF won every major title in Australia on the east coast including State, QLD Challenge, Victorian Classic, National, East Coast, Australasian Breeders Cup and Australian Champion. Some of these multiple times. Having proven himself as a wonderful show horse, the most important challenge was to see if he would meet our ideals as a breeding stallion. A handful of mares were selected to try with Crave FF in his 2-year old year and since then the results have surpassed all of our expectations and speak for themselves. Already Crave FF, still a young stallion himself at 11 years of age, has produced progeny that are winning across the globe. He has progeny in Australia, USA, Canada, UAE, New Zealand, Europe and the UK.
Show ring beauty is unquestionably important, however his offspring are now old enough to be proven performance horses which they are excelling at, in both the show ring as well as endurance with many offspring already having been sold into international endurance stables. Not only successful as a purebred sire, Crave FF has passed all tests as an excellent sire of derivatives, having produced multi national champions across most registries, once again not only as halter horses, but also as performance horses winning in open competition and dressage at the highest levels.
Crave FF has proved that both himself and his progeny are highly regarded due to their intelligence and are super trainable easy horses. Crave FF is a great horse to have around and is ridden by children.