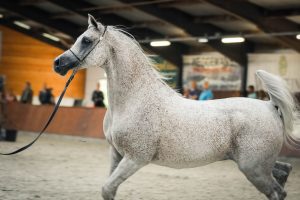 The Arabian Horse Society of the Netherlands (AVS) is pleased to announce the winner of their 2021 WAHO Trophy is the multi-talented gelding EROGANT.

The van Duyvenbode Family from the Netherlands are the proud breeders and owners of Erogant. He is a true family horse and has given the family so much joy in so many ways. In the show ring he has won numerous National and International championships, and was awarded the title of Gold Medal Champion Gelding at the All Nations Cup in Aachen in 2018. 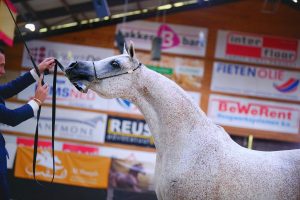 EROGANT posing for the judges.

Erogant is an ambassador for the versatility of this wonderful breed: In the sport of Western riding he performs at the ECAHO Master Level, ridden by Monica van Duyvenbode.  Together they have won many National and International prizes and participated at ECAHO European Championships for Arabian Sporthorses in Denmark, Poland and Austria, where, amongst other achievements, they clinched the Bronze medal for All Round Western.

A friend of the family, Vera Dopper, has started him under Classic saddle and is now riding him in the Advanced level of ECAHO dressage.

Erogant represents what the van Duyvenbode family is striving to achieve in their breeding programme; an Arabian horse with beauty, good conformation and a willingness to work, but above all the fantastic temperament we all know belongs with the Arabian Horse.

The WAHO Trophy was presented to Erogant by the chairman of the Arabian Horse Society, Mr. Gideon Reisel, at the Dutch National Championship Show in Exloo, the Netherlands on the 12th of September 2021. 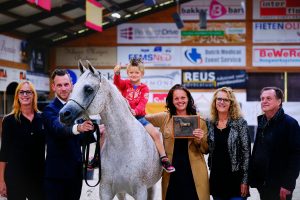