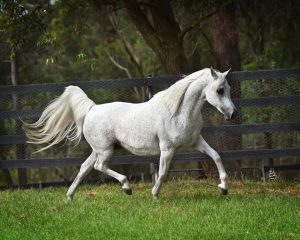 The Arabian Horse Society of Australia is delighted to announce that the winner of their 2020 WAHO Trophy is the esteemed broodmare Simeon Saada.

Citation by Marion Richmond, written in early 2020:  “The news that Simeon Saada was awarded the 2020 WAHO Trophy for Australia was received with great enthusiasm and celebration by everyone at Simeon Stud. Saada remains a favourite at Simeon, while epitomising the classic Arabian mare I envisioned when the journey towards an exclusively Straight Egyptian breeding program began in 1976.  Saada is a living testament to the original Simeon Straight Egyptian foundation stock, tracing directly in just the second generation to the legendary 27 Ibn Galal 5, imported from Babolna Stud in Hungary, through her dam, the equally iconic Simeon Safanad, while being further immortalised as a direct daughter of the late great Asfour, Australia’s leading Straight Egyptian sire originally imported from Dr. Nagel in Germany. 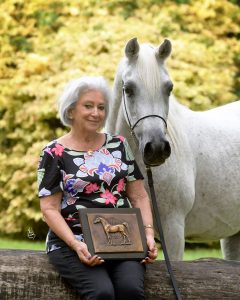 Simeon Saada has proven herself an exceptional producer over her breeding lifetime, with progeny and descendants exported all around the world, and with many more remaining as essential members of the Simeon breeding programme.  Her legacy continues to thrive at Simeon Stud through her son Simeon Samech (by Anaza Bay Shah), as well as through daughters Simeon Sepharad (by Asfour) and Simeon Saadia (by Imperial Madaar), and granddaughters Simeon Shafiyah (by Simeon Shifran), Simeon Shade (by Mulayh Ibn Maareesa), and Simeon Suzette, Simeon Susula and Simeon Sayit (all by Simeon Samech).  I look forward to the continuing contribution the descendants of Simeon Saada will inevitably play in the future success of the Simeon Stud.

To both WAHO and the AHSA, I extend a deep debt of gratitude for honouring Saada and the Simeon programme with this prestigious award. To have her still in our presence is the greatest gift – Saada will turn thirty years old in August 2020, and remains as radiant and as inspiring as ever.”

* Sadly, Saada has since passed away.  This is her obituary notice:  “On a crisp morning of September 1990 a beautiful filly was born. She was the result of a combination of genetics from two of Simeon Studs most treasured horses, the legendary ‘Asfour’ and farm matriarch ‘Simeon Safanad’. Simeon Saada was a full sibling to Simeon Stav, Simeon Salome, Simeon Sadik (exp GB), Simeon Shaina, Simeon Safir (exp EG), Simeon Shakaf and Simeon Silla (exp SA), most of which have gained Australian and World Championships and created dynasties of their own. Saada, with her big black eyes and classical Arabian beauty, was no exception to this. Although unshown, she went on to follow in her mother’s hoof prints and become one of Simeon Stud’s most treasured mares. She had 12 foals over her lifetime, the first four were exported, while the others became successful producers in Australia. Saada was an accomplished broodmare for Simeon Stud with her progeny having an impact all over the world. She was also the 2020 WAHO trophy recipient. Saada’s dynasty here at Simeon Stud will continue for many years to come through her daughter Simeon Saadia (by Imperial Madaar), granddaughter Simeon Shafiyah (Simeon Shifran x Simeon Sepharad) and son Simeon Samech (by Anaza Bay Shah), with 3 of his exceptional young daughters retained by Simeon Stud.  We will forever miss her kindness and beauty gracing the pastures here at the farm.  Rest In Peace Simeon Saada. “.